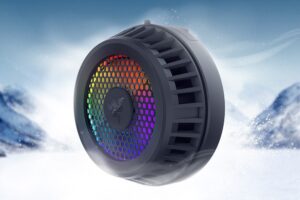 Razer has made a number of accessories for mobile gaming, and it is now adding another item to that list. It’s called simply the Razer Phone Cooler Chroma. And the product itself is exactly as described on the tin.

Naturally, having the Chroma RGB lighting, it’s probably the flashiest phone cooler out there, with 12 RGB LEDs. In addition to those, there’s a seven-bladed fan inside that spins up to 6400rpm, with a noise profile of 30dB. Beyond those, there’s an aluminum heat sink, and an electronic Peltier cooling tile.

That being said, there doesn’t seem to be a battery, so it will have to draw power via a USB-C cable. And the language on the product page doesn’t make it clear if the Razer Phone Cooler Chroma can draw power from the device that it is cooling. Which sounds a little counter-intuitive for a cooling device for a gaming phone, which inherently has mobility as its plus point.

But at any rate, the Razer Phone Cooler Chroma can be obtained from the official Razer store for RM279. Not right now though, as at the time of writing it’s out of stock. Also worth mentioning is that you can have the cooling fan with a conventional clamp, or one that supports MagSafe.

The post Razer Has An RGB Phone Cooler Fan Priced At RM279 appeared first on Lowyat.NET.