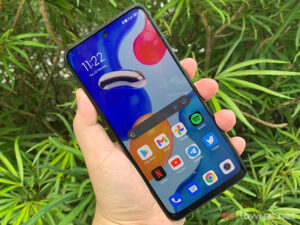 While the Redmi Note series is technically a mid-range lineup, I personally consider it as being under the budget category, given that most of its phones tend to fall under the RM1000 mark. The Redmi Note 11 series is the latest release from the Xiaomi sub-brand, starting at RM699 for the vanilla model and RM899 for the Note 11S.

Initially, I wasn’t looking forward to using Redmi, as my previous experiences with budget Androids weren’t the greatest. However, the Redmi Note 11S may have upended my view on cheap smartphones for the better.

The phone runs on an eight-core Mediatek Helio G96 chipset and comes with either 6GB or 8GB of RAM, depending on which configuration you buy. It, unfortunately, lacks NFC, wireless charging, and 5G but none of those are deal-breakers for those on a tight budget.

While the phone is a bit on the larger side with a 6.43-inch display, its tall aspect ratio makes it easy to hold. The bezels aren’t the thinnest but more than acceptable, although Xiaomi went for the fat bottom chin, when I would have preferred a more symmetrical design.

The backplate is made out of plastic with a matte finish, which I love as it makes the phone less susceptible to fingerprint smudges. The camera bump is quite significant, and it even has a second bump on top of the island for the primary camera. It’s a phone that might warrant a thick case to make the camera flush, if you’re the kind of person who often puts your phone face up.

It has a side-mounted fingerprint scanner that doubles as the power button and it works surprisingly well. My sweaty fingers are notorious for being difficult to read but the 11S handles it like a champ and quickly unlocks the phone every time.

Moving on, the 11S also carries the hallmark of every modern budget smartphone: the 3.5mm headphone jack. It even has an infrared blaster so you can use it as a remote for certain appliances like your TV or air conditioner. Both are fitted at the top of the phone with one of the speakers.

On the bottom, you’ll find another speaker and the USB-C charging port while the SIM slot is situated by itself on the left side of the phone. The SIM tray has room for two SIM cards as well a microSD card, which allows for storage expansion up to 1TB.

The headphone jack is not just a plus but also a must, at least in my opinion. While using my Bluetooth earphones with the 11S, I found the volume to be too low, I did not encounter the same issue with my wired earphones.

As for the stereo speakers, they can go up to a usable volume but again, it doesn’t hit the volume ceilings that I’d like; it has an odd quirk where the bottom speaker is noticeably louder than the top one, making the sound imbalanced at high volumes.

Having an AMOLED display is respectable for a phone at this price and with a 90Hz refresh rate and deep blacks, making content quite enjoyable. Having said that, the outdoor visibility isn’t great and the automatic brightness setting tends to lower the brightness way too much when indoors, making it more practical to just turn it off and adjusting it manually.

The performance on the Redmi Note 11S is relatively smooth and snappy, especially with the said 90Hz refresh rate. I encountered almost no lag in my regular daily usage, which mostly comprises of social media apps and video streaming.

I rarely play mobile games but gave Asphalt 9 a try and it was definitely playable with only the occasional lag or stuttering, though nothing particularly bad for casual gamers. MIUI’s Game Turbo has a performance mode but it didn’t seem to make a noticeable difference in the gameplay.

Its synthetic benchmark scores are average across the board, but this is expected for a device aimed at cash-strapped consumers.

While it’s more than fast enough for most people, the 33W charging is considered relatively slow in 2022 when compared to recent phones with 65W and 120W charging speeds. It takes a little over an hour to fully charge from 0%, but makes up for it with the large 5000mAh battery.

The phone can comfortably last two days even after switching the display to 90Hz, and could go into the third day on a single charge with light use and turning down the refresh rate. When put through a video loop test using YouTube, the phone lasted well over 14 hours.

The quadruple camera array comprises a 108MP wide main, an 8MP ultrawide, a 2MP macro, and a 2MP depth sensor. The primary camera is quite fast at focusing and is capable of providing great depth to the photos with accurate colours and stunning bokeh, though turning on the AI mode will sometimes result in the pictures being disgustingly over-saturated when it detects food.

The macro camera lets you take beautiful up-close shots, provided that you can actually get it to lock onto your subject, a task that is, suffice to say, somewhat difficult. The images also tend to come out grainy if you’re using the lens indoors, but it definitely shines under the right conditions.

Bonus points for the 16MP selfie camera being able to capture finer details in my facial hair.

As great as this phone is, the budget segment is extremely competitive at the moment and as such, there are a few brands out there that could give Redmi a run for its money.

Often touted as one of the best affordable smartphone brands, Xiaomi-spinoff POCO offers a high-value package with the POCO X3 Pro, powered by the higher-end Qualcomm Snapdragon 860 processor. It has a 120Hz refresh rate display, a 5160mAh battery with 33W charging, and a similar four-camera setup, though the downsides are that the main camera is only 48MP and the display uses LCD instead of AMOLED.

The base model with 6GB of RAM and 128GB of storage just barely counts as a budget smartphone at RM999. The higher-end 8GB+256GB variant is priced at RM1299, but most people won’t need this as the storage is expandable.

Samsung has also stepped up its budget game with the Galaxy M22, which runs on a Mediatek Helio G80 and has a 90Hz Super AMOLED display. For RM899, you get 6GB of RAM and 128GB of storage, which can also be expanded with a microSD card.

Just like with the Note 11S, the M22 has a quad-camera array with an ultrawide lens, a macro lens, and a depth sensor, but the primary camera is only 64MP. While it sports the same 5000mAh battery capacity, it has a slower charging speed of 25W, though it has the bonus of NFC support, which the 11S lacks.

The Redmi Note 11S is a great example of how far budget smartphones have come. Just a few years ago, Android phones with three-figure price tags had driven me onto the brink of madness with their constant lagging at the most mundane tasks, but the real-world performance of this phone is almost comparable to one twice its price.

Of course, It’s not for mobile gaming enthusiasts, but that’s clearly not the demographic Xiaomi is aiming for with the Note 11S. Not only would I happily recommend the Note 11S to those on a scarce budget, I’d go so far as to say it’s a good choice for any casual smartphone user who doesn’t want to overpay for high-end features that they’ll never use but still get a device that meets their daily needs.