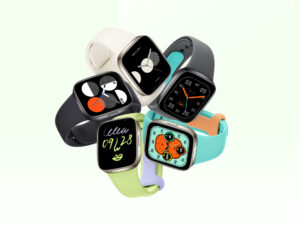 Xiaomi has unveiled new wearables under the budget Redmi brand that succeed the original Redmi Band back in 2020 as well as last year’s Redmi Watch 2. The new Redmi Watch 3 and Redmi Band 2 bring minimal upgrades to their offering but both devices did bump up the screen sizes.

The Watch 3 sports a 14.8% larger 1.75-inch AMOLED display compared to its predecessor’s 1.6-inches, with a resolution of 390×450 and a peak brightness of 600 nits. Just like last year’s model, the smartwatch has a waterproof rating of 5ATM and is equipped with built-in GPS to track your workout routes.

As you would expect, the Redmi Watch 3 has a bevy of over 100 sports modes to track all your exercises with automatic detection for six types of workouts. The device also has sensors to monitor your bloody oxygen levels in real-time as well as a heart rate monitor and sleep tracking.

Powered by a 289mAh battery, Xiaomi claims that the Watch 3 can last up to 12 days with normal use and seven days under heavy usage. Additionally, it is capable of connecting to your phone and making calls through Bluetooth with its built-in speaker and microphone.

The Redmi Band 2 is also equipped with a much larger 1.47-inch AMOLED display, whereas the original Band only had a 1.08-inch screen. Just like the Watch 3, the smart band is rated at 5ATM for water resistance but it does not have built-in GPS, so you will need to keep it connected to your phone for route tracking.

Fitness is where the Band 2 offers the most improvement from its predecessor, increasing the number of sports modes from just five to over 30 for workout tracking. The device also has sensors for blood oxygen monitoring, heart rate monitoring, sleep tracking, and menstrual cycle tracking.

The battery life sees no improvement, capable of running for up to 14 days in normal use cases while heavy usage will shave that down to six days. With the magnetic charger, it takes less than two hours to fully charge.