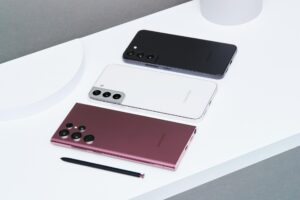 The Galaxy S23 series is not even officially launched, yet a rumour regarding its alleged successor has already surfaced thanks to South Korean publication TheElec. According to its most recent report, Samsung is suggested to be reviewing a plan to reduce the number of variants for its 2024 flagship, which we’ll tentatively refer to as the Galaxy S24.

The publication claims the company has already begun working on its next flagship series under the alleged project name “DM”, with two sub-projects currently under active development. These are given the designation of DM1 and DM3, which TheElec believes are the respective codenames for the standard and Ultra variants of the Samsung Galaxy S24 smartphone line up. As you can already tell, mysteriously missing from the list is DM2, which is presumed to be the Plus model.

The reason for the absence of the mid-class option is unknown, though TheElec suspects that the current state of the smartphone market may be the reason behind this. Citing the publication, consumers have been observed to prefer purchasing either the budget or premium models from major releases, therefore resulting in poor sales for the in-between variant.

It wouldn’t be surprising if the South Korean tech giant did decide to proceed with this direction. Afterall, Samsung has been releasing its Galaxy S series in just two variants (standard and Plus) prior to the Galaxy S10 and Galaxy S20 line-ups back in 2019 and 2020, respectively. If anything, this change (provided that TheElec’s speculation is accurate) is merely the company reverting back to its former business model.

For Samsung, following this approach would certainly benefit it financially, especially when a third option no longer needs to be produced. But then again, the company could always save the mid-class model for a later date and even market it under a clever moniker. Remember the Lite and Fan Edition (FE) variants, anyone?