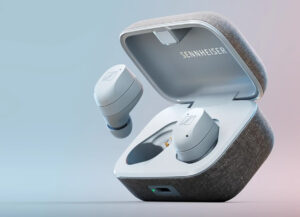 Sennheiser has officially debuted its latest earbuds, the MOMENTUM True Wireless 3 (MTW 3). As you may recall, the new model saw an extensive leak earlier this month which revealed its design and specifications, though details such as its availability and pricing were still unknown at that time.

As it turns out, the information that was unintentionally leaked by German airline Lufthansa via its WorldShop website is indeed accurate. The Sennheiser MTW 3 does come with an updated design where it no longer features a circular design, but instead a rectangle shape reminiscent of the brand’s more affordable CX earbuds series. Included together with it is a wide charging case that features a premium woven-like texture like its predecessor, though the USB-C charging port has now been relocated to its front.

Hardware-wise, Sennheiser says the new MTW 3 packs the same 7mm dynamic drivers as before, keeping in line with the previous model’s high-quality audio delivery. Meanwhile, the onboard active noise cancelling (ANC) feature has been upgraded to feature a new adaptive setup that can “continuously observe ambient noise to suppress it in real time.” The long and short of it, this ability would allow the feature to immediately filter out external noises, especially at locations where ambient audio levels are inconsistent (ie: a construction site).

Besides that, the new earbuds feature a triple-microphone setup on each side for improved call quality, as well as customisable touch controls, multi codec (AAC, SBC and aptX Adaptive) support, reduced latency. It is also rated IPX4 in terms of splash resistance, which is sufficient if you intend to use it during workouts or jogs.

In terms of battery performance, Sennheiser claims the MTW 3 is capable of lasting up to seven hours on a full charge, with a total of up to 28 hours when used together with its charging case. Additionally, the case now comes with wireless charging support, enabling it to be compatible with Qi-based charging pads.

The new Sennheiser MOMENTUM True Wireless 3 is priced at US$ 250 (~RM 1,088), which is actually US$ 50 cheaper than its predecessor’s launch price (sold locally at RM 1,499). It is offered in black, white and graphite colour options, and is slated to ship out on 10 May 2022 for certain markets. Unfortunately, the company has yet to confirm whether the buds are expected to be released in Malaysia.