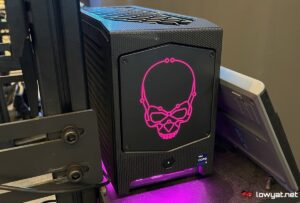 The Next Unit of Computing (NUC) is a family of customisable barebone mini PCs and laptops created by Intel that has been around in the market since 2013. NUCs are mainly associated with the commercial segment given their compact footprint and modular parts but Intel did create a number of them that are meant for gamers including the NUC 12 Extreme which was announced several months after the launch of 12th Gen Intel Core processors.

First revealed to the world back in February, it is unclear when exactly the mini gaming PC made its way to Malaysia. In fact, we were not aware that you can actually purchase it in our market until we stumbled upon the system in Intel’s booth at the ongoing Malaysia IT Fair in Mid Valley Megamall.

A quick chat with the staff at the booth has led us to this listing by SNS Network. The well-known IT company from Ipoh, also a long-time partner of Intel, has previously released its own pre-built gaming PC line-up powered by 12th Gen Intel Core processors called the JOI Gaming PC X-treme.

Despite being a NUC, this particular model is much larger than your typical NUC release as the NUC 12 Extreme has been designed to support dedicated graphics cards with lengths of up to 12 inches. Intel has even managed to find a way to fit a 650W 80+ Gold power supply into it.

Back to the NUC 12 Extreme bundle that was listed by SNS Network, the NUC unit includes Core i9-12900, 16GB of RAM, 1TB solid state drive, and has also been pre-installed with Windows 11 Pro. The bundle is also inclusive of a 27-inch Acer Nitro VG271S Full HD IPS gaming monitor that has a refresh rate of 165Hz and meets the DisplayHDR 400 standards.

The bundle offered by SNS Network also covers Logitech gaming peripherals in the form of a G512 mechanical gaming keyboard, G502 Hero gaming mouse, and Pro X gaming headset. The only thing missing from this particular bundle is a graphics card although the Core i9-12900 still has an integrated Intel UHD Graphics 770 for you to use as a temporary measure while you are hunting for the right dedicated graphics card.

As for its price, SNS Network is currently offering the NUC 12 Extreme bundle for RM11,699 instead of its usual price of RM 12,085. A rather hefty price tag indeed, considering a barebone unit for the Core i9 variant without RAM and SSD has a price tag of USD 1,450 (~RM 6,478).

Nevertheless, If you are interested in getting your hands on a unit, do fill up this interest form first and have the company’s representative contact you to finalize the actual specs as well as bundle items for your NUC 12 Extreme system.