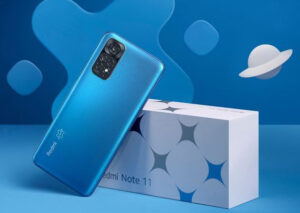 Xiaomi Malaysia has announced that its 12th Xiaomi Fan Festival (XFF) will commence tomorrow on 6 April. At the same time, the company also revealed that it will be offering a new special edition Redmi Note 11 to celebrate its yearly event, which is slated to be sold at a special discounted price for a limited time until 8 April 2022.

The Redmi Note 11 XFF edition features a blue rear panel, along with the logo of this year’s festival situated beside the Redmi branding. Included together with the phone is a limited edition box, a 33W charging brick, USB-A to USB-C cable, a clear plastic case, and a sheet of Xiaomi Fan Festival 2022-themed stickers.

The rest of the phone is similar to the initial model which was launched locally back in February. Unchanged is the 6.43-inch FHD+ AMOLED display with 90Hz refresh rate, Snapdragon 680 chipset, and 5,000mAh battery. As for memory configuration, the limited edition is only offered with 4GB of RAM and 128GB of internal storage. Meanwhile, featured in the quad camera array on its back is a 50MP primary shooter, an 8MP ultra-wide, 2MP macro, and a 2MP depth sensor. Housed within the phone’s punch-hole camera cutout on its display is a 13MP selfie camera.

The Redmi Note 11 XFF edition is exclusively available via Xiaomi’s official stores on Lazada and Shopee. As mentioned earlier, the company will offer the phone on a special flash sale from 6 to 8 April, making it available for just RM 699. Outside of this promotion, the specia edition smartphone will retail at RM 749.