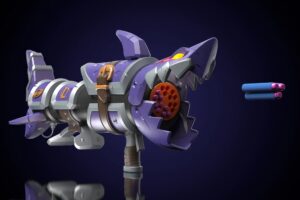 If you’re a hardcore fan of League of Legends, or even a casual dabbler thanks to the Arcane animated series, then you know the character Jinx. If you take the fandom to the extreme, then you may even be familiar with her gun, Fishbones. And now, there is a Nerf gun version of it.

This pretty special Nerf gun is part of the Nerf LMTD line which is made up of crossovers with other IPs. The name may or may not be a contraction of “limited”, but it comes with a price tag that suggests the former, but we’ll get to that later.

Going back to the thing itself, the Fishbones Nerf gun is, to use Hasbro’s words, “inspired by” the gun used by the League of Legends character. Befitting the name, it is probably best described as a shoulder-mounted, pump-action shark. According to the product description, the mouth of the shark is manually operated, so aside from when reloading it also doubles as the safety switch of sorts for Fishbones.

Once open, you’ll see a drum that holds 18 darts in clusters of three. Each pull of the trigger will fire the top three darts, after which you pull on the dorsal fun to rotate the drum, prepping the next three darts to be fired.

While it looks really fancy, the Fishbones Nerf gun is far from practical, even in a game of toy gun shootout. That, and the fact that it costs US$169.99 (~RM779), makes it for of a collector’s or display item than something you’d play with on the regular. To fit its status as a display item, it even comes with a display stand. It is currently only open for pre-order, and delivery of the item is only expected on approximately 31 December of 2023. So it’s fair to say that it will be a long wait for those looking to pick up Fishbones of their own from the local market.

The post There Is Now A Nerf Version Of Jinx’s Gun Fishbones appeared first on Lowyat.NET.