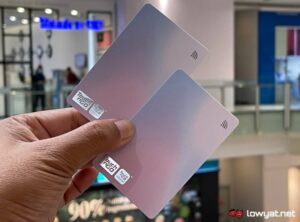 Even though the card has been teased by the company’s executive for more than a year, it was only last weekend that the first major solid info regarding the Enhanced Touch ‘n Go (TNG) card made its way online. Less than a week later, the card was put on sale at the TNG Hub in Nu Sentral, Kuala Lumpur.

First revealed by SoyaCincau, we also managed to get our hands on the card from the store which costs RM10 just like the existing TNG card. That being said, we were then made to understand that the sale of the card has been stopped just as we made our way out of the TNG Hub.

As you may see, the design of the card is certainly different from the existing TNG card. Draped in light violet, pink, and blue hues, the Enhanced TNG card doesn’t have any graphics on it with the exception of TNG, TNG eWallet, and NFC logos on its front area.

There is also a QR code on its back that points to the TNG eWallet app, alongside the card’s serial number and expiry date. At the moment, the ability to top up the card’s balance via a mobile phone’s NFC is still not yet available.

As mentioned in our previous report, the staging site for TNG’s helpdesk noted that this functionality requires app version 1.7.72 which has not yet been rolled out to end-users at the time that this article was published. According to the staff at the hub, we will probably see the feature being made available sometime in May.

Outside of the NFC balance top up feature, the Enhanced TNG card works just like the existing TNG card. This means you can still top up the card’s balance using self-service machines or over the counter at physical reload locations.

While we have reached out to TNG to obtain further information about its new NFC card, the company has declined to comment on this story. Hence, we have no idea what’s next for the card but we reckoned that the launch will probably take place very soon, since the card already made its way to the TNG Hub.

The post This Is The New Enhanced Touch n Go Card: Features NFC and Minimalist Design appeared first on Lowyat.NET.