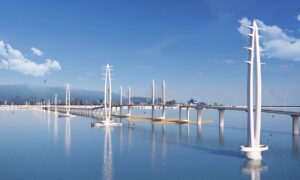 Tenaga National Berhad (TNB) has announced a major project to bring a direct connection of electricity from the National Grid from the mainland to Penang. The connection will go through overhead line transmission to maintain the island’s electricity supply and will cost a staggering RM500 million to build.

The 8.5km monopole transmission tower project connects the Perai Power Station Main Inlet Substation (PMU) to The Light PMU in Penang. The second of its kind, the network will be constructed in parallel with the Penang Bridge and TNB said it will be the fourth line connecting the National Grid to Penang, with the other three being submarine cables.

TNB’s Chief Grid Officer Husaini Husin said that the project is expected to be completed by the end of 2024. He also pointed out that it will become yet another iconic landmark for the island due to the unique design of the transmission line tower that resembles a betel nut which is a direct reference to the origin of Penang’s name (buah pinang).

The overhead line transmission is meant to ensure that Penang’s existing supply system isn’t affected when the only power station on the island SJ Gelugor, which has a generating capacity of 300 megawatts (MW), is scheduled to end its service contract at the end of 2024.  The current system has a capacity of 1,130MW while in January 2020, the peak load demand recorded reached 777.85MW, so the project is meant to keep this capacity stable.

Previously, TNB has implemented similar overhead line transmission back in 2015 to power Pulau Besar [pdf] in Melaka. This particular project involved 12 monopole towers across a 4.2km stretch and only costs RM32.5 million, a stark difference in price compared to the Penang project that is only a little over twice as long.

According to TNB, the Penang overhead line transmission project has been approved by both the Finance Ministry and the Penang state government based on the island’s projected demand for electricity until 2030. Physical works, including the construction of the tower foundation, the installation of tower structures, and the conductor spanning works are set to begin at the end of this year.