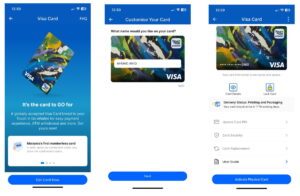 Touch n Go’s intention to launch a Visa prepaid card that is tied to the TNG eWallet app was first revealed in October 2021. However, it is only in the past few days that activities surrounding the card have begun to appear and now it seemed that the company may kick off the Visa card’s rollout to some users.

In several screenshots shared by Lowyat.NET Forumer aniq8676 over at the TNG eWallet thread, the Visa Card has appeared on the app’s main page as well as its Financial Services section. In the Visa Card section, users can then select the Get Card Now option to begin the application process.

When we reached out to aniq8676, he shared another screenshot which showed that the Visa Card will enable users to upgrade their eWallet to the Premium tier just like GO+, GOpinjam, CarInsure, and SafeTrip. The forumer has also informed us that the Visa Card section appeared to him on app version 1.7.88 which is the same version that we are on but somehow, we were not able to see the option ourselves.

Meanwhile, another screenshot that aniq8676 has shared on the forum was taken from the card’s Product Disclosure Sheet which listed several fees that are associated with the new TNG Visa Card:

Even though TNG charges RM10 as the application fee, aniq8676 noted that it only costs him RM5 for the application. This particular piece of information has also been confirmed by a screenshot posted by Twitter user @NEWSCHANNELS01 which listed the RM5 as the delivery fee.

However, this particular screenshot also showed the card’s annual fee as RM18 instead of RM8. Both of these sources have also shared screenshots that users are able to add their names on the TNG Visa Card.

As for the delivery times, the physical version of the TNG Visa Card apparently takes between seven to ten working days to arrive in the customer’s hands. Given what we have seen today, it seemed quite possible that the official announcement may take place this week and as always, we will keep you posted once that takes place.