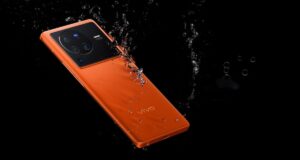 vivo recently launched its latest flagship-tier X80 series smartphones in China, which consists of a standard model and a high-end Pro variant. The latter being the more interesting, as it is offered with two different chipset options: a Qualcomm Snapdragon 8 Gen 1 or a MediaTek Dimensity 9000.

Both variants sport a similar design, featuring a display with a top-centered camera cutout, as well as a rear panel that sports a circular camera array integrated on a wide island. The duo also comes with an advanced 27-layer VC cooling system, stereo speakers, and NFC connectivity.

First off is the standard variant of the vivo X80, which comes with a 6.78-inch Samsung E5 AMOLED display with 1,500 nits peak brightness, 100% DCI-P3 colour gamut coverage, a refresh rate of 120Hz, and an optical under-display fingerprint scanner. Unlike its higher-end sibling, the phone is only offered with the MediaTek Dimensity 9000 SoC, along with up to 12GB of RAM and up to 512GB of internal storage. Also onboard is a 4,500mAh battery with 80W fast charging support via USB-C.

As for imaging, found on its back is a triple-camera setup which consists of a 50MP Sony IMX866 primary sensor, a 12MP ultrawide, and a 12MP 2x zoom telephoto – all of which feature Zeiss T* lens coating. Meanwhile, housed within its display’s punch-hole cutout is a 32MP selfie camera.

Next up is the vivo X80 Pro, which – as mentioned earlier – is offered with either a Snapdragon 8 Gen 1 or a Dimensity 9000 chipset, with the former being the more likeliest option to be shipped out for the global market. Regardless of SoC choice, this variant comes with the same memory configurations as its sibling.

Display-wise, the Pro’s 6.78-inch screen features a Samsung E5 LTPO2 AMOLED screen with QHD+ resolution, granular refresh rate of up to 120Hz, and an ultrasonic under-display fingerprint scanner. Battery-wise, the phone comes with a slightly larger 4,700 mAh capacity with 80W fast charging via USB-C and 50W fast charging via wireless. It’s also worth noting that this variant also comes with IP68 water/dust proofing.

Unlike the standard variant, the vivo X80 Pro is equipped with Zeiss T* lens coated quad-camera setup which comprises a custom 50MP Samsung ISOCELL GNV primary sensor, 48MP ultrawide, 12MP 2x telephoto, and an 8MP 5x telephoto. Found within the cutout on its display is the same 32MP selfie camera.

In terms of pricing, the standard vivo X80 model is available at a starting price of CNY 3,699 (~RM 2,460) for the lowest configuration, while the Pro variant (regardless of chipset) starts from CNY 5,499 (~RM 3,657). vivo Malaysia has recently confirmed that the new series is slated to launch locally next week on 8 May 2022, though keep in mind that configurations for both devices may differ from the Chinese release.