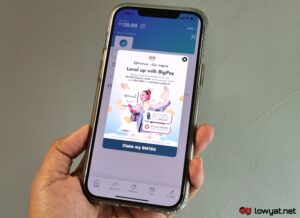 With the ePemula initiative having launched just yesterday, we’re all surely excited to get RM150 credit in our e-wallets as soon as possible. But before you rush to get your well-deserved money, you would first need to decide on which e-wallet you’ll be claiming your RM150 credit with.

As you may have heard, choosing the wrong e-wallet service may have an impact on your freedom to utilise the ePemula credit according to your needs or preferences. So, understandably, it can be a daunting task to pick which e-wallet to use for the ePemula credit.

We’re here to make the choice easier by telling you all the reasons you should pick BigPay as your go-to e-wallet! But before all that, you’ll only be eligible to claim the RM150 credit if you’re:

So, if you fall into either one of these categories, here’s everything you need to know about claiming your ePemula credit on BigPay.

One of the BIG reasons to utilise BigPay to claim your RM150 ePemula credit is the myriad of vouchers and deals you can get from the service. For starters, you can expect to get unlimited cashback from mega brands such as JD Sports, Lululemon, Sephora, Caring Pharmacy, Focus Point and more!

This means that not only will you be receiving RM150 in credit, but you’ll also be able to get some of that money back when shopping with BigPay! Up to RM1,500 in vouchers will also be up for grabs when you decide to use BigPay as your go-to e-wallet for ePemula.

Not only that, users who also sign up with the promo code, PCEPEMULA, will stand a chance to win an iPhone 13, where one winner will be picked every week during the month of April.

IT’S EASY TO SIGN UP AND EVEN EASIER TO USE

While other e-wallets may not be accepted at every merchant or restaurant, BigPay makes things easier by providing you with a physical card to use wherever you go!

All you need to do is download the BigPay app on your phone, sign up and create an account with your ID, add RM20 into your account, and your card will be on its way for immediate use. Talk about an easy sign-up process for a handy card you can use anywhere, anytime!

Next, to claim your ePemula credit, all you have to do once you’re signed up are:

If everything is in order, you should receive the ePemula credit and all the rewards within three days after your application. In most cases, you’re going to see them on the same day!

So, if you’re looking for an e-wallet that will give you the best deals when you claim your ePemula, you can download the BigPay app on Google Play and Apple App Store today! You can also learn more about ePemula on the BigPay website, here.

This article was brought to you by BigPay.