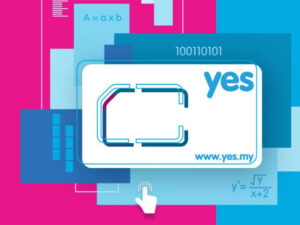 UPDATE (3:17 PM): Yes has taken the website offline. Scroll below for further details.

YTL Communications, the company behind the Yes telco earlier today has revealed that it will be rolling out 5G services soon through a media invite for a launch event that will take place tomorrow. At the same time, we have discovered that the company has since added a dedicated section for 5G on its website.

Through the new section, YTL has further revealed that 5G services will be made available to both Yes prepaid and postpaid customers. That being said, not all Yes plans will have access to 5G though.

The new 5G section only listed two Yes plans which include the Yes Prepaid FT5G and Yes Postpaid FT5G plans which are essentially the 5G derivative of the telco’s existing Kasi Up Prepaid Unlimited and Kasi Up Postpaid 49, respectively.

Hence, you can see that both FT5G prepaid and postpaid plans still carry the same traits from their Kasi Up twins. The only difference is that subscribers of these plans will also be able to access 5G when they are within the coverage areas in Kuala Lumpur, Putrajaya, and Cyberjaya.

YTL pointed out that FT5G subscribers will have unlimited access to 5G but didn’t clarify whether there is any speed cap. As a reference, the Prepaid FT5G plan has a speed cap of 7Mbps when connected to a 4G network although is not exactly surprising since it is based on the Kasi Up Prepaid Unlimited plan.

Meanwhile, YTL has also promised that there will be no price increase for any customers that signed up for either Yes FT5G plans before April 2022. The company is also offering 5G devices plan involving selected devices from Xiaomi, Realme, Vivo, Nokia, and OPPO.

In general, YTL has become the second company to officially be on board the national 5G network that is being deployed and managed by Digital Nasional Berhad (DNB) which is a Special Purpose Vehicle owned by the Ministry of Finance. Prior to this, TM has also signed a deal with DNB although the company has yet to provide further details regarding the availability date of 5G for its customers.

Shortly after this article went online, YTL decided to take down the 5G section of the Yes’ website that we highlighted above. Additionally, the company’s representative has also reached out to Lowyat.NET and noted that the pricing shown on the site at the moment have not yet been finalized.

More details regarding Yes 5G plans will be revealed at tomorrow’s launch event, according to the representative. So, stay tuned for more details coming your way soon.