Revulsion against corruption was what lost Malaysia’s entrenched elite the last election and landed a slew of political leaders with slates of criminal charges they most thoroughly deserved.

However, most were content that their wealth and power networks would be able to reverse the democratic vote and disrupt a fragile reformist coalition in a country fractured by racial divides. The toppled PM Najib Razak predicted right from the start that a so-called ‘Perak Move’ would solve his problems and indeed with the help of his local Pahang ruler, the present Agong, that goal was achieved roughly within the time period of two years, which had been likewise suggested at the time by the current head of the MACC (now facing his own corruption allegations).

Despite the mandate of the popular vote, the Agong has appointed a coalition of the losing parties to run the country over the past two years, resulting in the dropping of the majority of the corruption charges against them and the return of opaque governance, bounty projects, negotiated contracts, middlemen, fat funds for ‘Bumiputera’ grants and all the other appurtenances of corrupted governance that have only grown worse and worse as Malaysia’s privileged few have fought for the remaining spoils of office, namely the dwindling resources of the state.

Just how the Pahang royal family has treated its own state over the past few decades has been thrown into sharp relief as a result of the present floods, which themselves have provided an efficiency test for the self-serving combination of political groups now in charge of the country in terms of their ability to govern as opposed to simply divide the spoils of office. 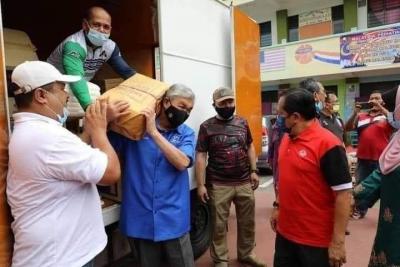 With corruption comes incompetence and disastrous mismanagement, as exasperated Malaysians have been forced to endure.

Not only have the inept, uncaring and incompetent ranks of UMNO and their allies been slow and ineffective in responding to the crisis, but when they have done it has been with their usual clownish attempts to turn tragedy to their own political advantage. Taking the biscuit, UMNO President Zahid Hamidi, who has delayed court appearances endlessly on the grounds of a bad neck, posed humping sacks of rescue products on the same bad neck.

Meanwhile, Aid boxes have had first to be printed with party political advertising (as if the ministers personally paid for them) before being distributed, whilst MPs across the land have fought to steal the limelight by interfering in rescue missions and aid distribution.

No shame? Aid distribution must wait on the political advertising first

The finance minister achieved his own special low as he posed with an alleged flood victim who had been handed a goodie bag with his own name and logo painstakingly printed on the outside – paid for by himself?

He then allowed himself to be pictured cruising a flooded area in a desperately needed inflatable rescue boat, so surrounded by camera crews and journalists that there was no space for victims to be pulled on board.

Flood victim gets a free bag with my name on it!

Another deputy welfare minister went so far as to pose for photos as if driving the very distribution lorries to the needy (she forgot to put the key in the ignition to achieve the authentic look). The prime minister himself was filmed flying serenely over the disaster by helicopter only to later explain that some people standing on rooftops could not be easily saved as the street numbers for their homes were underwater.

Social media has erupted with such critical material

He later had himself photographed by the media spade in hand as if digging out the mud – only to be caught tossing the spade to a flunkey after just one gesture at the job before walking off.

Malaysians have been rightly infuriated at the tardiness, the abuses and stupid showing off which have been the signature element of the response from the ruling parties over these floods.

After all, these fellows’ priority for restoring their non-democratic control of government has clearly been to serve themselves and their cohorts more spoils of office after a hungry couple of years out of power. Should anyone have forgotten the recent privations caused by corruption, incompetence and double standards during the worst of the Covid lockdowns, this dire response to Malaysia’s flood crisis will have reminded them.

The other reminder of the return to corrupted authoritarianism has been the abuse once more of the sinister MCMC, which has been caught applying to Twitter to remove coments critical of this calamitous response. How very like Najib’s heyday over 1MDB.

This climactic event has also set minds thinking on the longer and deeper consequences of governance designed purely for the enrichment of the few at the expense of the vulnerable majority and of the very land they live on.

The ravages of the Taib family of the resources of Sarawak have been ignored by the federal states of Malaysia, not least because it has become evident that so many of the existing ruling families of the mainland states have been up to the exact same practices, tearing down forests and grabbing contracts however destructive those might be.

In particular, it seems that no royal request for this or that simply can be denied by some state governments – a compliance that has  usually been combined with a hefty benefit to the ruling party.

There may be those who state and believe that the entire state personally belongs to these constitutional royals, as if they were feudal overlords, but under the laws of modern times this simply is not the case and the unregulated plunder has been identified as a prime cause of this flood disaster amongst other tragedies.

Denuded hillsides are a key reason why seasonal downpours turn into lethal floods and mudslides. Moreover the mass deforestation of Southeast Asia (promoted by a handful of ruling families, politicians and crony timber tycoons) has been a driving force behind the global climate change that has made those seasonal weather events more violent.

Royal logging licences have caught many a passing eye

Whilst the perpetrators have sheltered in their palatial homes it is the common folk who have taken all the brunt.

Netizens have responded by circulating images of the devastation, log jams and mudslides caused by the current and recent destructive logging, carried out in regions such as Pahang and Kelantan as if there was no tomorrow when it comes to de-gazetting protected areas and extracting the last natural resources of the states.

Who has been behind these decisions by the state governments? There on the billboards time and again the beneficiaries and drivers of all this extraction have been announced – for example, the Pahang royals, who just happen to have propped back into office the present coalition of corrupted parties voted out at the last election.

The justification for this destructive dash to cash in the resources of the state has therefore not been to help the needy with development but to continue and expand the billionaire wealth of Malaysia’s vested interests. What easier way could there be for such sultans to continue to maintain their scores of polo ponies in air-conditioned stables, settle gambling debts, curate vast properties across the world or keep up with their Middle Eastern royal pals?

The perpetrators have been for all to see

Likewise, the gold private jet owning royal family of Johor. The grabs for land and resources, combined with apparent universal disregard for the rights of those with native customary tenure or even purchased leases, have been exhibited here also, as documented by Sarawak Report.

Protection of endangered species, indigenous peoples or the beauties of the landscape have no priority compared to the grandure and greed of a handful of royal egos for whose lifestyles the welfare of future generations of Malaysia must apparently be sacrificed.

For these reasons corruption and governing incompetence will be the central themes once more of any future election and the judgement from those upcoming future generations who have arrived to an empty plate awaits.

GE14 gave the raiders from Malaysia’s political and ruling elite their chance to re-think and re-group as a modern more caring and inclusive leadership and to abide by the rule of law. Instead, they chose to defy the verdict of the population, to grab back power and then to return to grabbing resources and national wealth without the least care in the world for reform, reflection or improvement.

The aforementioned Head of the MACC (Malaysian Anti-Corruption Commission) had predicted the outcome exactly and has apparently taken his own reward. He too has become part of Malaysia’s daily corruption news saga, following the resignation of the respected Terence Gomez from the board of the ‘independent anti-corruption body’ after its chairman refused to take action over illegitimate shareholdings this MACC boss has been found to have acquired.

That corruption is back to being business as normal in Malaysia was further confirmed by the convicted ex-PM Najib himself, promoted as the keynote speaker at the Chinese economic summit hosted in KL.

What better symbol than this speech of what has happened to Malaysia since the return of a weakened UMNO reliant on a gang of allies who are all seeking to make their own fortunes from the spoils of office.

The past month is just a warning of the dire fate the country and the new generation face from their lawless greed. GE15 must see a clean sweep or these throwbacks will swipe what’s left and then depart.