In the wake of criticism that trustees appointed by the prime minister have abused their public appointments to help raise money for the Conservatives and themselves, Sarawak Report has now established that one of the party’s major annual fundraisers, the Summer Party on 20th June, has been moved from its usual spot at the Hurlingham Club …. to the Victoria & Albert Museum on Cromwell Road.

On top of this income an auction is held, with prizes frequently involving opportunities to mingle with ministers socially. Insiders have confirmed that the auction can raise a further £750k to £1.5 million. 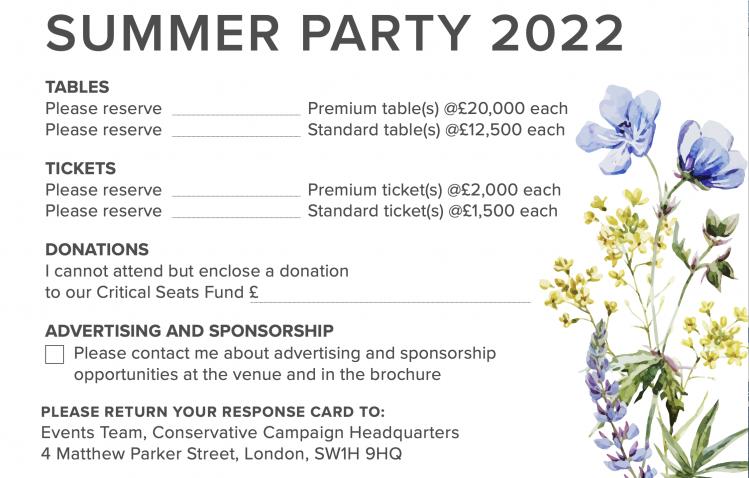 Cheap at the price?

The growing use by the Conservative fund raising machine of the illustrious premises of the the Victoria and Albert Museum has already started to raise eyebrows, not least because a number of the trustees appointed by the prime minister have close Conservative ties.

These include the socialite and glossy magazine editor, Nicholas Coleridge, who was appointed Chairman of the museum’s Board of Trustees in 2015 and who last month offered to do a guided tour of his favourite museum artefacts as a prize for the separate Tory ‘spring lunch’ auction. Coleridge is said to be on the brink of receiving a much anticipated ‘Sir’ to add to his name.

The gesture raised complaints not least because according to the code of conduct, trustees ‘should be, and be seen to be, politically impartial‘. Shadow culture secretary Lucy Powell wrote to the Commissioner on Public Appointments observing that ‘auctioning an exclusive tour at a party-political fundraiser would not appear to pass the test of ”politically impartial”.

The museum has countered that no areas were removed from the public as a result of the Tory donor tour and no special access was involved. Yet, the concerns have not stopped there. Also on the board is the ‘concierge’ company boss and Conservative Party Chairman, Ben Elliot, whom Boris Johnson re-appointed last year (after a 4 year term since 2016) in further contravention of what would appear to be the rules governing appointments.

The code of conduct states that trustees “should not occupy a paid party political post or hold a particularly sensitive or high-profile role in a political party” which Ben Elliot plainly does.

The matter got even thornier last week when on Thursday it emerged that Elliot himself has used the V&A to host membership events for his company Quintessentially, which has already been the subject of a series of ‘cash for access’ controversies given his connections to both royalty and the Conservative party to whom his clients have been invited to donate in return for introductions.

According to the charity sector publication Third Sector two Quintessentially events have been held at the V&A which were exclusive to members of the so-called concierge company who pay thousands of pounds a year for its services. The first was a breakfast event in 2018 about artist Frida Kahlo hosted by Elliot and the second was linked to a Christian Dior exhibition at the museum in 2019, also hosted by Elliot.

“Neither event was advertised to V&A members or the general public on the museum’s website. The V&A did not deny that they were available only to people signed up to Elliot’s firm” observes the magazine.

Defenders of such events say that several museums and other historic public London venues like the V&A have established commercial operations to rent out space for just these sorts of occasions to raise funds. The premises are advertised online with going rates for anyone to hire.

However, others consider the Conservative trustees to be exploiting a public position for politics and commercial benefit.

There are several advantages to utilising the museum which has numerous spacious galleries packed with priceless artwork to provide an elegant backdrop to an event. The venue combines cachet with being handily round the corner from where most wealthy Londoners choose to live.

The prices at which the V&A is being rented out are also far beneath the commercial rate for equivalent space in Central London. Large dining halls such as the Dome and Raphael Gallery are advertised online at a cost of c £12-14,500 per evening seating 400 people. Even with catering adding up to £1,500 cost per table there are fat margins to be made at the prices being charged for tickets.

According to Third Sector the V&A accounts indicate that Ben Elliot achieved much more reasonable rates for his own more modest receptions for Quintessentially, the museum registering payments for £1,000 from Quintessentially in each of 2018 and 2019, which the charity told the publication represented payment for the events without any discount.

Presently however, the cheapest available venue openly for hire online is for a breakfast gallery costing £2,000 which accommodates just 40 guests. The museum advertises that exhibitions can be hired for exclusive viewing for an additional £1,500-2,000.

Labour’s shadow minister for arts and civil society, Barbara Keeley MP, claims the V&A risks being “brought into disrepute” over Quintessentially’s use of the gallery on the grounds that trustees’ personal business interests should be kept separate from the work of the charity.

“Charities do not exist for trustees to further their political or business interests. Ben Elliot’s use of the V&A for private company events raises further questions about conflicts of interest and plays into a long-standing pattern of the Conservative Party and government playing loose with the rules” she told Third Sector.